Silverwood Golf Club asked long time member and current Club President Frank Gallagher for a few paragraphs on the beginnings of Silverwood Golf Club. In typical Frank fashion, he has went above and beyond the call and wrong an incredible piece as seen below.

These are some of my sketchy memories of how Silverwood golf club came into being.

It was during the mid 70s when I was living in Lisburn and the government at the time were issuing all sorts of incentives to move to Craigavon (New City) and I duly took them up on their offer and moved to Craigavon in 1974. It was during 1975 that I became very aware of the excellent sporting facilities provided in the area. The nine-hole golf course became very appealing to me after watching Tom Watson winning the 1975 British Open that I became interested in the game but I had never played golf in my life. It was at this point that myself and my brother-in-law Eamon McConaghy thought that we should give this game a try.

It was then that we decided to buy a couple of full sets of clubs. Well you couldn’t really call them a full set of clubs, but we each managed to get about six or seven old clubs with Hickory shafts (probably worth a fortune now!) The memory of our first introduction to the game is very vivid. As we stood on the first tee with these clubs and a few old balls, the river seemed to be a long way away, eventually we reached it after five or six shots and probably a few lost balls before we got over it. Eventually we made it to the green with shots too numerous to mention.

As there was no signage to say where the second hole was and we assumed that what now is the eight tee box must be the start of the second hole. We proceeded to play it and flogged our way to the green again losing count of the number of shots taken. The ninth tee box we then reckoned was the start of the third hole, we played it with the same enthusiasm, shots by this stage didn’t matter, The fact that you were able to hit the ball and move it a short way was in itself a measure for success. That brought us back to the first tee box and it was at this stage we decided that even though it was supposed to be a nine hole course you must have to play these three holes three times. It was only when we reached the first green for the third time that we heard voices on the other side of a very high hedge. From memory there appeared to be a hole in the hedge and when we investigated where the voices were coming from, we were able to see the flag on which is now the seventh green.

After the golf we went to the Country Club Hotel for a few pints and that’s when I reckon that the golfing bug set in. This became a regular occurrence and we started meeting quite a few people like ourselves who played golf just for the sport of it.

Around 1976/77 about 15 or 20 of us started what was then known as the Craigavon Golf Society and at the outset I was in charge of the handicapping.We started off having weekly competitions and all the money for the entrance fees was put into prices for the following week. The draw for the time slots was done by drawing out the cards on the morning of the competition and on the completion of the competition the prices were given out very soon afterwards. We also every now and then had weekends away at other clubs and because of this the society became very popular and the numbers started to increase.

I also remember during these years that there were political decisions made that meant all sporting facilities / Complex’s including swings, swimming pools and parks were to be closed on a Sunday and if you flouted these regulations you would be fined. It meant that though the payment office of the golf complex was closed you still could gain access to the course, A number of members of the society including myself continued to use the course on a Sunday even though there was a police man who stood on the first tee and took names and addresses of everyone who went to tee off.

This happened for a period of time but no prosecutions were ever made because it transpired that the maximum they could’ve fine us was one shilling (5p) and it wasn’t worth the effort.

Once a year all the prizes that were won during the year were brought back and some sort of an official presentation was made.

See photo below (Some glitter in those prizes!) 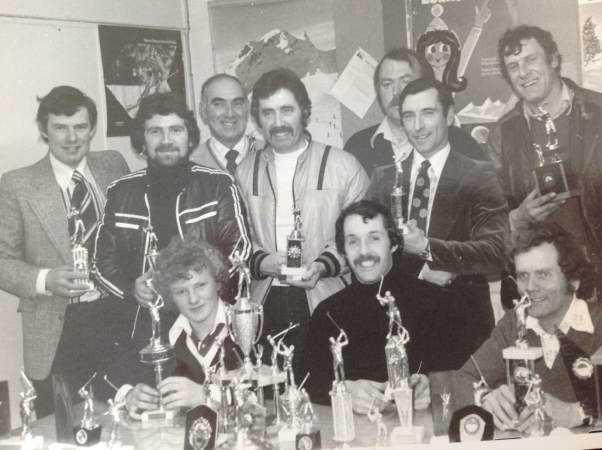 I can’t remember exactly when but because of the increased numbers we applied for GUI membership on a society basis and were known as Craigavon Golf Society. Our numbers then increased to forty or fifty members.

At this point we didn’t have anywhere to meet other than the sectional wooden building that was in the car park which was used to collect Green / Ski fees. This building was erected after the original building photographed below was bombed and prior to us becoming a society.

We sought permission to renovate a part of the old building that was still standing for use a as a club house and permission was granted. A number of volunteers from the society give freely of their time in the evenings to make this happen. It took a few months with guys using their respective skills in building, plastering, glazing, painting, joinery etc to get a secure room complete for social activities.

Some of the members involved in this were; Eamon McConaghy, Kevin Turley, Joe Kelly, Tony Chambers, Jimmy Hoy, Maurice and Dee McCluskey, Arthur McCarron, Eamon McCorry, Mark Jordan, Connor Jordan, Damien McCartan, George Sewell and myself. One of the first things we did was to install a pool table and join the Lurgan and district pool league.

Our stay in this building however was short lived because the council then informed us that plans we’re afoot to build a new centre which would house all our golfing needs. We were promised that there would be locker rooms showers and office and a meeting room. It was quite a few years before work started on this building which is now known as the Alpine lodge with work only being completed in 1991.

In the meantime the Country Club hotel then offered us a facility to hold meetings etc., and many a good night was spent in there. Photo below with some existing members being presented with a memorial trophy when we were still a society, I think this was in the late seventies or early eighties. 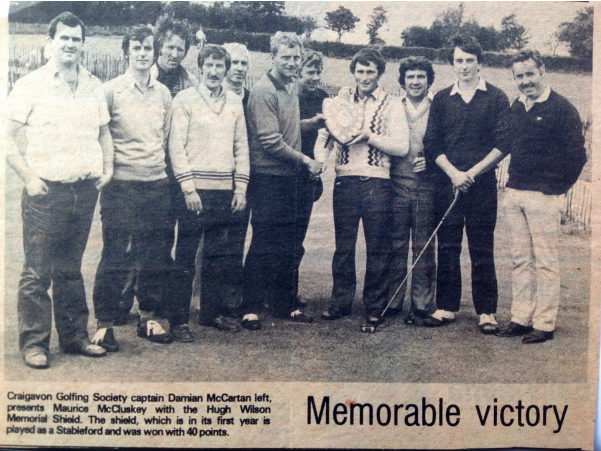 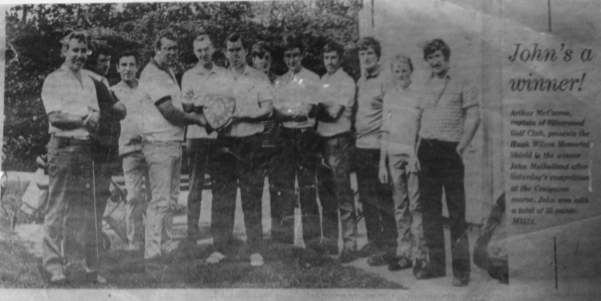 This is the same trophy being presented to John Mulholland only this time we had changed from society to Silverwood Golf Club, some of those in photo are, L-R Frank Gallagher, Eamon McConaghy, Jimmy Hoy, John Mulholland, George Sewell (Senior) Arthur McCarron, Tom McCaughley, Steven McCaughley, and Sidney Houston 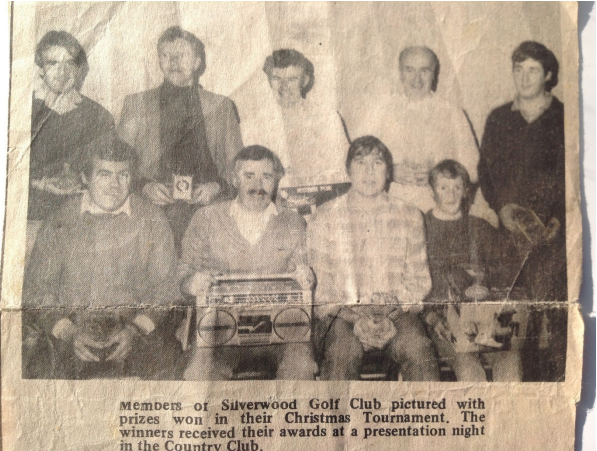 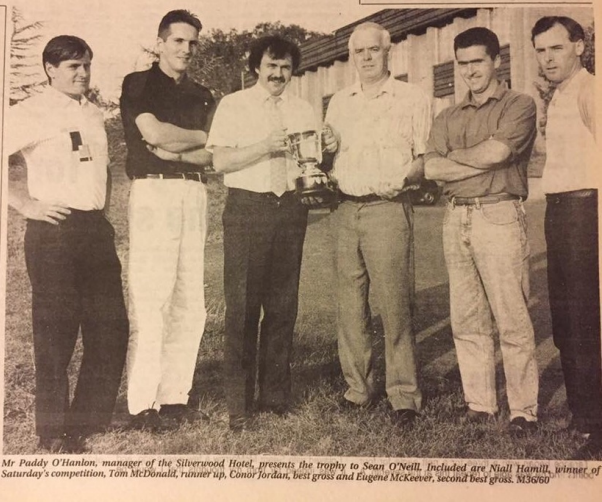 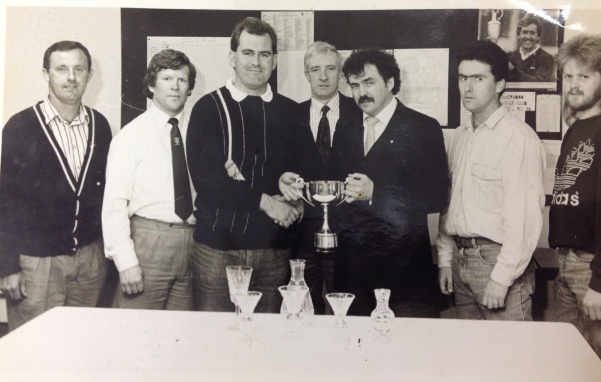 During the early eighties the the club went from strength andfinally were registered as a club in 1984 after fulfilling all the criteria set down by the GUI I think the photo below is one of the first councils to be formed. 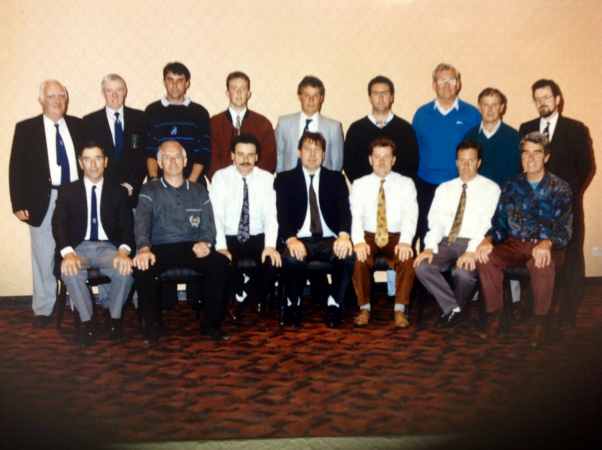 One highlight from early days of the club was the qualification of a Silverwood team to compete in the Pro Am at the Carrrols Irish Open, they managed to qualify at Armagh with Eamon McCorry sinking a long birdie on the eighteenth green to see them through, Then they had a week or so to wait on the draw that was done on
RTE and the announcement of the Pro they would be playing alongside (Mark James).

Silverwood competing in the pro/am at the 1985 IRISH OPEN 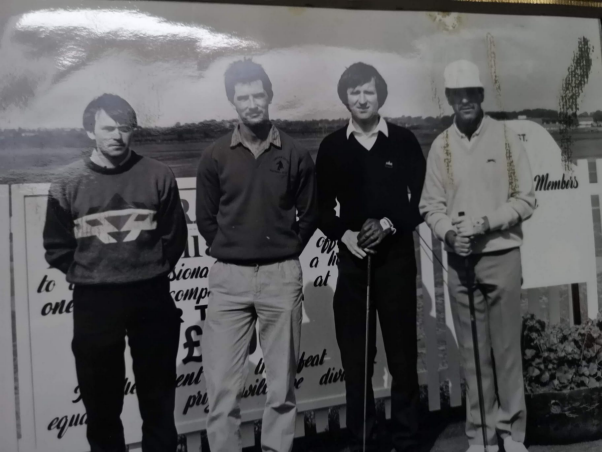 Early days indeed we didn’t have any club attire, it was a lot later before the club Logo was introduced

A few more photos from this memorable event. 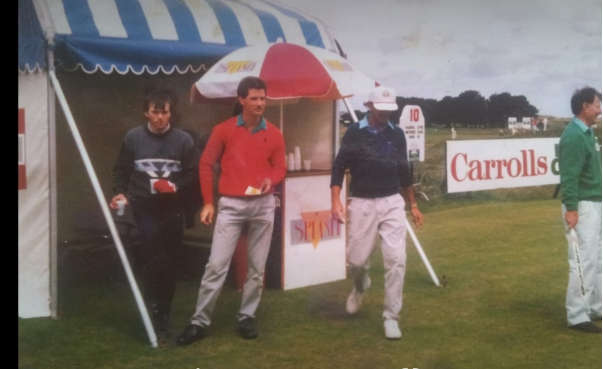 Dee, Eamon and Dan stopped for some light refreshments 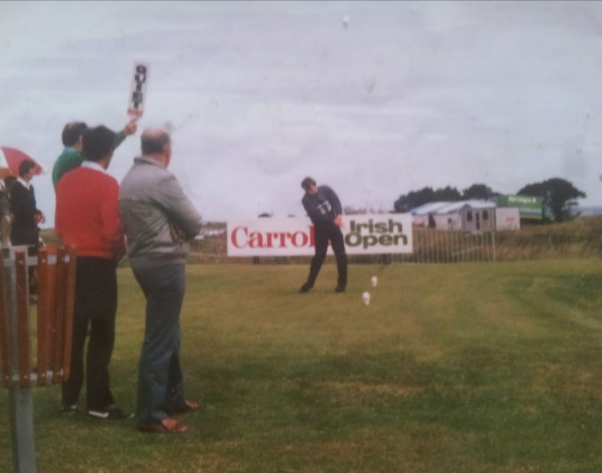 Dee has never lost that swing!!!!!

The club continues to go from strength to strength with many thanks going to any members who participated in club councils, also the club Captains and Presidents down the years who played major roles in the success of Silverwood Golf Club.